Stopped at borders, beaten in the field, labelled as terror collaborators –

The space for civil society organizations in Israel and the OPT, specifically those working to end the Israeli occupation in Palestine and to promote human rights in the OPT, is increasingly shrinking. This dangerous trend continues in 2018, as the Government of Israel has taken further means to restrict the ability of  human rights organizations to operate by investigating their actions, restricting their ability to fundraise, labeling them as ‘foreign agents’ and advancing laws targeting freedom of speech while backing attacks by non-state actors on them.

The attempts to crack down on human rights work can be traced back to extremist right-wing groups, such as recent examples emphasize:

The right-wing organisation Ad Kan is currently trying to put pressure on the  Swiss government to stop funding the work of the NGO Akevot – Institute for Israeli-Palestinian Conflict Research through a report which also “uncovers” HRDF’s close cooperation with Akevot;

The right-wing group Im Tirtzu launched a national campaign calling to ‘kick the New Israel Fund out of Israel’. The campaign, targeting the NIF for its funding of human rights groups in Israel, includes the HRDF among other NGOs on the list of NIF grantees;

The government’s closing/evacuation of venues used for activities of anti-occupation organisations, after pressure from right-wing organizations, such as Jerusalem’s Municipality’s decision to evict Barbur art gallery, after it hosted an event with Breaking the Silence.

These are just a few examples marking the increasing delegitimization efforts, which is inflated by right-wing organizations and supported by state actors, while dangerously affecting public opinion. Such attacks lead to personal risks for HRDs, and create a “chilling effect” on human rights work. Most strikingly, attempts to pressure donors by bringing false information, often leads to limitations in funding flows to human rights organisations, burden in bureaucratic demands and occasional cancellation of funds.

The HRDF strives to provide protection and support to HR organizations in the form of legal aid and media crisis management. Most recently, as part of the frequent detention and interrogation of Israeli and non Israeli citizens when entering Israel due to their involvement in human rights activism, HRDF-funded lawyers provided legal representation to the detained activists, and legal counseling to many others. 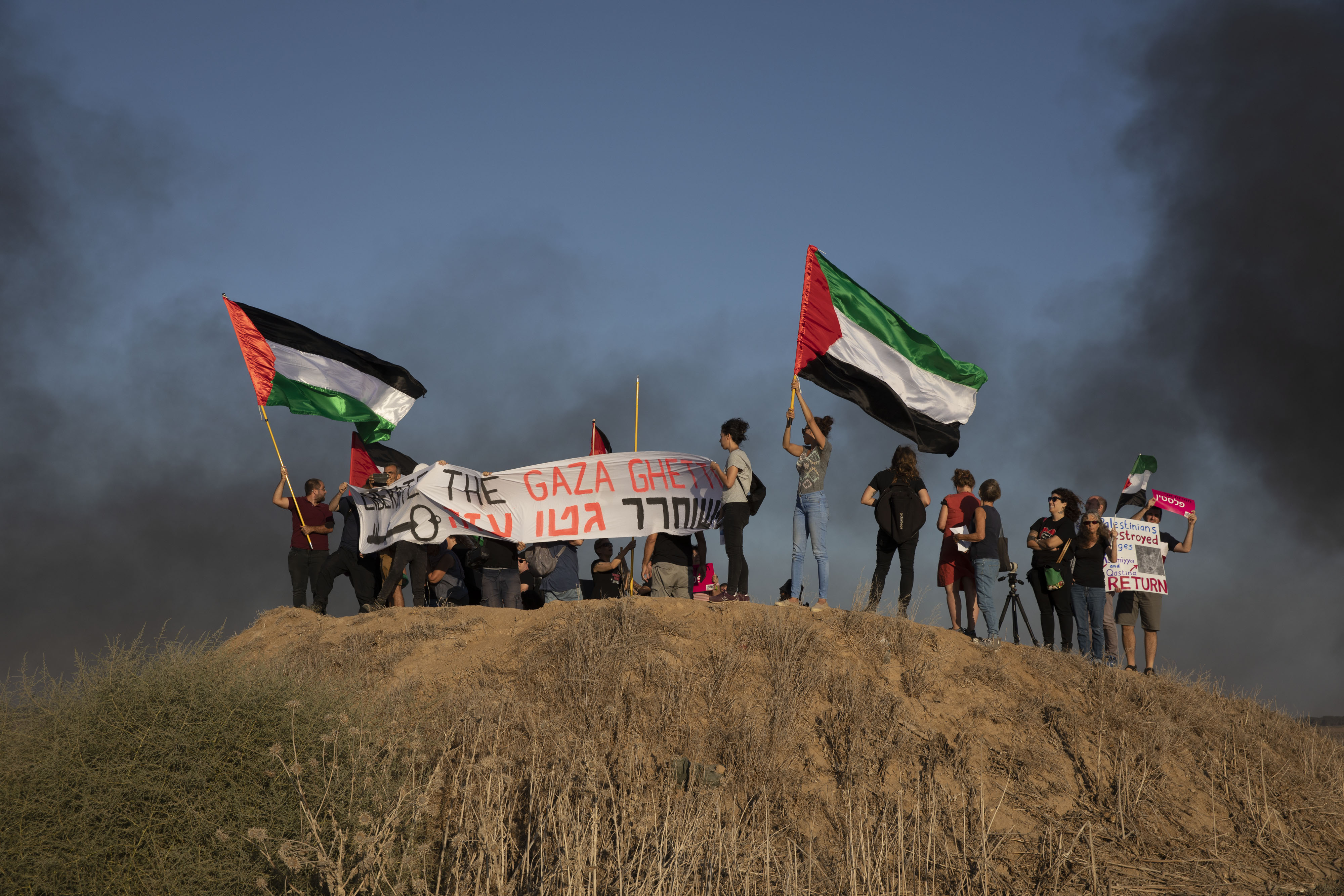 Israeli and International activists protest on the Israeli side of the Israel-Gaza border fence, in solidarity with the weekly “Great March of Return” Friday protest in Gaza, September 21, 2018. Photo by Activestills.

Legal updates: the use of criminal, civil and administrative law to prosecute HRDs, ignoring their universally recognized status and protection

The appeal against his conviction and verdict, of Sheikh Sayah abu-Mdigham al-Turi, from the unrecognized Bedouin village al-Araqib, was rejected at the Be’er-Sheva’s District Court in August 2018.

Sheikh Sayah, backed by the Bedouin community in the Negev, is determined to continue the legal battle even from his imprisonment. HRDF – funded lawyer, Adv. Shadeh Ibn-Bary will file a request to appeal to Israel’s High Court of Justice against the District Court decision.  In the course of the appeal procedure at the High Court also the issue of land ownership in Al-Araqib will be addressed, an issue currently pending before Be’er Sheva’s District Court, as both parties, the State and the a-Touri Bedouin Tribe, claim ownership.

At the conclusion of a 4-year trial in 2017, Sheikh Sayah was convicted by Be’er-Sheva’s Magistrates Court for 19 charges of trespassing, 19 charges of entering public space against the law, and one charge of violating a legal order. In December 2017, he was sentenced to 10 months in prison, 5 months’ probation (as long as he does not repeat any of the felonies for a period of three years) and a fine of 36,000 NIS. After a vigorous appeal-hearing at the District Court, his appeal was rejected and he is intended to begin his prison service in the middle of October 2018.

The District Court chose to support the state’s stand, and convict Sheikh Sayah for his remaining on the land, and by doing so,  opened the door for criminalization of hundreds of thousands of Bedouins, who reside in un-recognized villages in the Negev. The criminal procedure is used as a tool to determine a political dispute and deter the whole Bedouin community.

Sheikh Sayah and his family have led the struggle for recognition of land ownership, the rights of Bedouin in the Negev desert and recognition of unrecognized villages for many years. Sheikh Sayah has led a lengthy, non-violent campaign of protests and actions in the field, public advocacy both locally and internationally as well as legal advocacy. As a human rights defender, Sheikh Sayah is known to the authorities, which frequently have used their powers to restrict his activities and deter him and others from carrying them out.

In a recent incident, Sheikh Sayah was arrested on July 2018, after hosting an event marking the struggle for Al-Araqib’s recognition. He was suspected of trespassing and entering state land. Represented by HRDF-funded lawyer Adv. Michal Pomerantz, he was released on a substantial bail. The decision to arrest Sayah for the alleged offenses after the conviction raises concern that this will be considered a violation of probation and is a further attempt to deter him and his community from living on their land.

Criminalization campaign against Israeli activists who protest in the West Bank

We are witnessing a harsh campaign against Israeli HRDs who protest against Israel’s occupation of the OPT which targets, in particular, individuals who regularly participate in joint Palestinian-Israeli demonstrations in the West Bank. The activists are facing arbitrary arrests, frequent use of closed military zone orders to disperse protests and often severe indictments that are filed against them long after the event.

Prosecution of individual activists who participate in joint non-violent protests in the OPT is part of a growing atmosphere that de-legitimizes resistance to government policies, affecting also HR organizations and International peace activists.

These devoted activists are also targeted by a May 2018 Ad Kan report which calls on the State to criminally charge HRDs. The campaign also targeted Adv. Gaby Lasky, who frequently represents Israeli activists.

One alarming example is detailed below.

Compilation of the trial of Sahar M. Vardi and Lihi Joffe

The two leading Israeli Women’s HRDs were arrested in 2014 during a protest against restriction of freedom of movement in Hebron, and indicted one year later. After a lengthy trial of two and a half years, in June 2018 the court approved a plea bargain, according to which the two confessed to less severe charges: ‘Participating in an Illegal Assembly’ and ‘Obstructing a lawful arrest,’ and were sent for probation service review. The two were not convicted but received social service hours.  Vardi is a board member of the HRDF and Joffe is a board member of ‘Women Coalition for Peace’.

Read HRDF’s overview and analysis of Israeli HRDs charged following their participation in protests in the OPT.

Your presence at these hearings, scheduled for October- November 2018, is important.

On a further note, we congratulate our legal advisor, Adv. Michael Sfard, for his appointment as Commissioner to the International Commission of Jurists as one of  60 eminent judges and lawyers from all regions of the world.