2017 In Retrospect: Struggling for the protection of Human Rights Defenders

Criminalization and Legal Harassment of Bedouin Communities in the Negev

In the 35 unrecognized hamlets in the Negev, the state makes policitised attempts to evacuate the residents and concentrate all the Bedouin community in large towns. Where residents refuse to relocate, they face demolitions and heavy fines to cover the costs of these demolition. Al-Arakib village was demolished and rebuilt dozens of times, and activists involved in nonviolent resistance to demolitions face growing threats, while the community’s land dispute is under discussion at the District court in Be’er Sheva.

Many of the Al-Arakib residents are tried in criminal cases held in Be’er Sheva’s court and represented by Adv. Shade Abn-Bari, HRDF-funded lawyer. In 2017,  thirteen activists were tried in three separate trials for “Obstructing Police” during protests in 2016. In January 2018, two trials involving eight of the activists concluded without conviction, while the third trial for the rest of the activists is on-going into 2018. Of those eight activists, a plea bargain relating to seven was accepted by the court removing four completely from the indictment. The other three admitted to the charges but were not convicted.

In addition, in a civil procedure, on August 2017, 6 village leaders were imposed with 262,000 NIS expenses to cover demolition costs, and an additional 100,000 NIS to cover the trial costs.  28 other defendants were fined for about 11,500 NIS each, on average, in different plea bargains reached during the same trial.

In addition, 10 village activists were charged in a Contempt of Court for their refusal to evacuate the land. In December 2017 the court decided to reject the state’s request and to award the defendants a refund of 7500 NIS for their costs. The court noted that the state did not exhausted the relevant procedures on cases of land under dispute, and that Contempt of Court was meant to be a residual procedure and not a means to be used under financial justification. Unfortunately, the state, in its attack against the residents, is not appealing this decision.

Al-Araqib leader, Sheikh Sayyah abu-Mdigham was convicted of 18 trespassing charges, 18 charges of entering public space against the law, and one charge of violating a legal order. In December 2017, he was sentenced at Beer Sheva Magistrates Court to 10 months in prison, 5 months’ probation (as long as he does not repeat any of the felonies for a three years period) and a fine of 36,000 NIS. The court agreed to the defense’s request to delay the execution of the sentence to February 2018, but set some strict conditions, mainly: two bail orders of 20,000 NIS and a guarantee for the defendant to start his imprisonment on time, in addition to a removal from the land under dispute. Since the essence of the struggle is holding to the land, throughout the entire trial Shikh Syah insisted not to leave the land as long as the question of ownership was not determined. Therefore, when the court decided on the conditions for the delay, Sheikh Sayah refused and was taken into custody. He was released only after the appeal was submitted to the court. The defense appealed against these conditions, and at an urgent hearing the court annulled the removal condition. The defense appealed.

End of project: HRDF will not finance legal defense to minors in East Jerusalem

By the end of 2017 we have decided to terminate one of our long-time projects, Protecting East Jerusalem Minors Under Arrest.

Throughout 2011 to 2017, HRDF represented 220 minors in cases of arrests. Despite the urgency and the constant need of this project, the limited budget of HRDF are targeted first and foremost to the protection of HRDs. We will focus our capacity in delivering services in other areas of work which are more directly linked to our mandate and mission.

We wish to thank all donors who have supported this particular project in the past: the New Israel Fund, The Swiss Department of Foreign Affairs and the British Shalom Salaam Trust. We also thank our close partners in working with East Jerusalem Minors: The Wadi Hilwe Information Center, Adv. Mouhammad Mahmoud and Adv. Lea Tsemel.

The Special UN Rapporteur on the Situation of HRDs, Mr. Michel Forst, came to Israel and the OPT for a first visit, in December 2017.

As the Rapporteur never received a formal invitation from Israel, he had to come in his private capacity, for an academic visit, that was also used for encounters with local HRDs and field tours. Ms. Sandra Peterson, Executive Director of the Norwegian Human Rights Fund, HRDF partners, accompanied Mr. Forst on his visit.

The 4-day visit included two field-tours, to the Negev/Naqab, and to Hebron city and South Hebron Hills, as well as meetings in Jerusalem and BirZeit – with leaders of East Jerusalem protest groups, activists from feminist groups, and key human rights organizations based in Israel and in the OPT.

In each site, Mr. Forst and Ms. Peterson met with HRDs as well as activists from solidarity movements and HR organizations, and heard about the different risks they face:

Special attention was placed on women HRDs from diverse communities and the unique challenges they face, e.g. gender-based threats or sexual forms of attacks that they face as HRDs.

Mr. Forst gave two academic talks, one hosted by the Van Leer Institute and co-hosted by the Emile Zola Chair for Human Rights at the Academic College of Management; and another at the Birzeit Law Institute, co-sponsored by al-Haq. In these talks, the Rapporteur surveyed the current challenging climate for HR organizations, and the common risks and threats that HRDs are facing around the world. The Jerusalem speech was followed by a panel of respondents, activists and academics, which was chaired by our legal advisor, adv. Michael Sfard. The panelists made useful observations on the special status and rights of HRDs, and on the effects of the persecution on individuals and organizations, including shaping HRDs as dissidents. They also raised important questions about the practices of HR organizations, from ‘mobilizing the shame’ of the state, to internalizing suspicion. 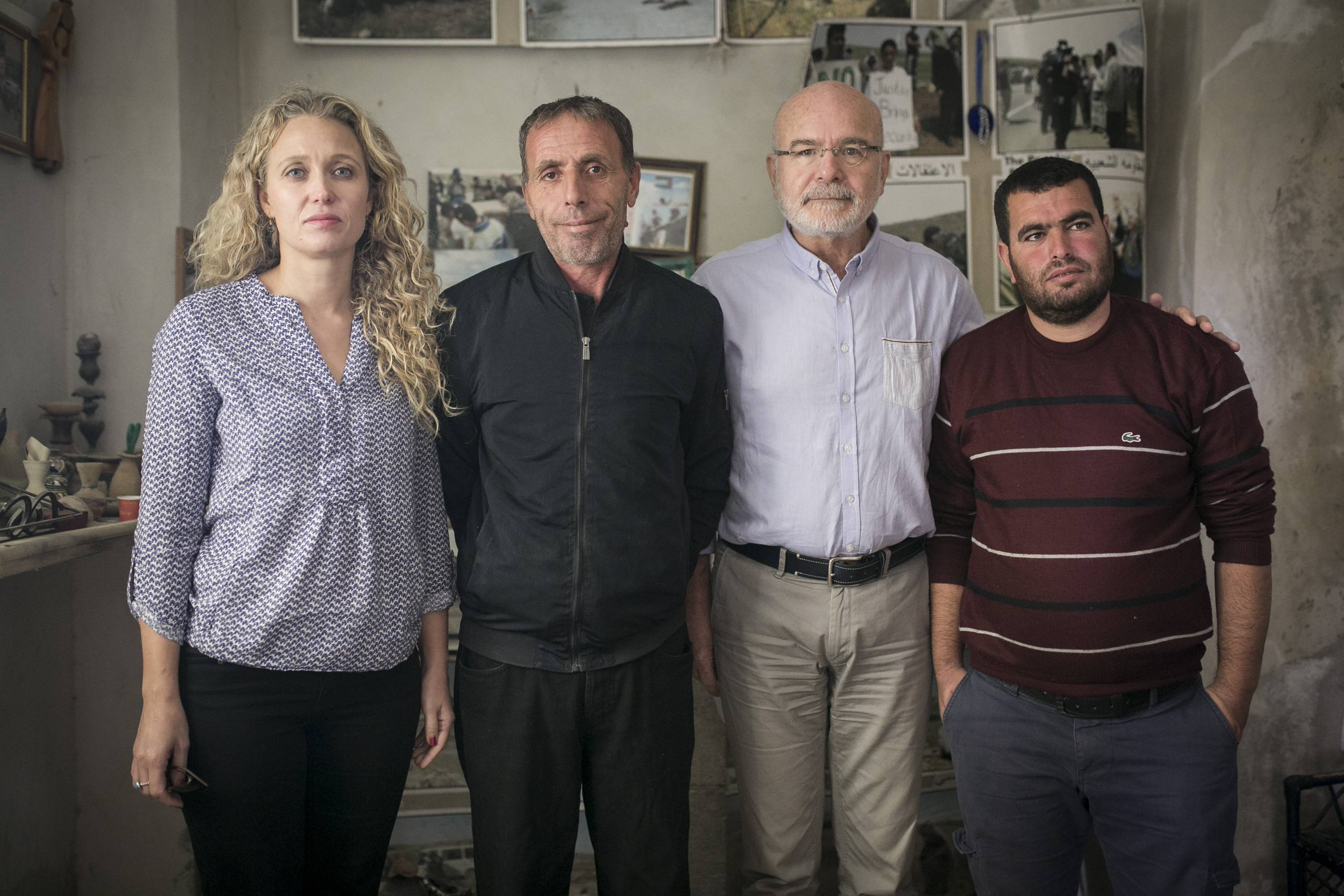 Civil lawsuits against HRDs contribute to the ‘chilling effect’ in Israel’s civil society. Often, it is sufficient to merely threaten with a lawsuit (including demanding compensation in order to prevent lawsuit) in order to create deterrence and silence activists for fear of losing a lawsuit which might incur heavy financial burden in the long term.

During 2017, we saw an increasing use of civil laws as a tool to harm HRDs. Many activist receive lawsuits, or threats of lawsuits—either general threats or very concrete threats (warning before filing a lawsuit), following things they said or wrote as part of their Human Rights’ protection activity (often on social media).

This new threat is alarming because the tool of civil law is available not only to the state but to every civilian person or body, and used by extremist right-wing organizations as well as individual activists.

Other potential civil or administrative procedures against HRDs include damages suits by the state, citing ‘policing expenses’ (as has been the case in Al-Araqib), preventing entry into Israel of international HR organizations’ workers, and more.

Finally, social media smear campaigns were used more aggressively towards individual HRDs, including personal threats and publications of personal details on the web. This troubling trend forced activists to ask the court to issue a threatening harassment prevention order, to protect themselves and their families.

Shrinking space for HR Movements – around the world, and in Israel and the OPT

The Shrinking Space for human rights movements is by now a well documented phenomenon and its impact on civil society is researched. Over the last year, the HRDF has received a growing number of calls for support from local and international HR groups, and provided legal counsel representation, and media crisis intervention, to organizations facing:

In addition, we have felt the impact of the shrinking space on our own operations, including:

Human Rights Defenders are ״Grassroots Champions of change״  – and we remain devoted to protecting them.

These were HRDF’s highlights in 2017:

We appeal to your support for our activities in 2018. As persecution of HRDs deteriorates, more activists and movements need our services to protect themselves and continue work; and we rely on your support to sustain our activity. Please consider making a donation to the HRDF, to protect the space for human rights.